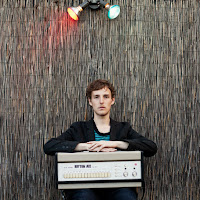 Multi-instrumentalist, arranger, producer, and vocalist, Jonti, began assembling music after his departure from South Africa to Australia. Spending countless hours studying records like they were books, processing each song, this became Jonti's music school, testing his theories on a 4-track recorder.

Jonti has now recorded with Mark Ronson, Santigold, Sean Lennon and the Dap-Kings, as well as producer John Agnello (Sonic Youth, Dinosaur Jr., Kurt Vile). For Jonti's debut album, coming this fall on Stones Throw, he went the opposite route, doing everything himself, start to finish.

The album is Twiligig and is slated for an October release. Twirligig draws inspiration from many of Jonti's favorite artists: Madlib, Stereolab, Free Design and The Beach Boys. But Twirligig's main inspiration came from cartoonist/ filmmaker Norman Mclaren. Jonti explains, "His films are complex, but they're still fun. You can feel his enthusiasm for techniques and experimentation. I try make simple pop songs with that same enthusiasm."

Although Jonti describes his music as simple, label head Peanut Butter Wolf sees it as anything but that. "I understand the pop references because his music is so catchy, but the arrangements blew me away. I couldn't figure out how the hell he did what he did. That he did it all on his own at such an early age kinda scared me. I knew right away I needed to add him to the roster." You will soon understand why Stones Throw is proud to present it's first Australian signing Jonti as a new member of the family.
Email Post
Labels: free music free music friday jonti