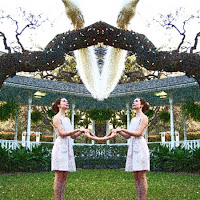 Coppertone is Los Angeles' Sasha Wiseman, a one-woman pop damager specializing in cold, beat-driven anthems swathed in quietly intimidating atmospherics. The Kill & Release EP is a brief 12 minutes, but offers bodily transport into a world that's as surreal and synthetic as it is strangely familiar-something like the dream sequence in a horror film. "Tyranness" offers bassy thump and synthy throb, her voice echoing from an infinite darkness. Instant standout "Clandestiny" is a work of goopy burbling bliss, an inspired collision of canned drums, fizzy keys and welcoming vocals. "Vows" proffers warm, ballooning electro-psychedelia, but "ROTT" is clanging and crude, demanding and Teutonic. And when things come to a creeping close-with a cover of Charles Manson's "All is One"-everything's been stripped down to one constant: Coppertone herself, a woman armed with a net, a knife, keyboards and lust.