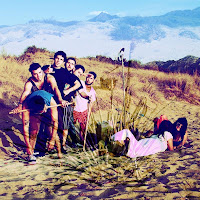 DAVILA 666 was formed in the summer of 2005 by Sir Charles Davila (lead vocals, bass) and AJ Davila (bass, vocals). Both had produced beats for Puerto Rico underground rap group CI*FI, in which Sir Charles was also an emcee.

Now managed by Vice Music, DAVILA 666 continues to release music and tour around the world, rapidly gaining notoriety as "The World's Greatest Party Band." They released their second full-length, Tan Bajo, in Feb. of this year on In The Red.