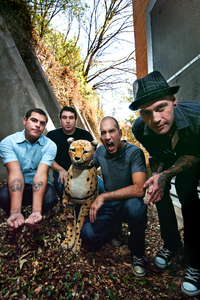 ALIEN ANT FARM is proud to announce their new deal with the Executive Music Group label via Fontana/Universal. The original line-up--Dryden Mitchell (lead vocals), Mike Cosgrove (drums), Terry Corso (guitar), Tye Zamora (bass)--will start to work on their fourth album in November and is looking to release it Spring 2012. It’ll be their first release since 2006's UP IN THE ATTIC, which spawned the hit single “Forgive And Forget,” and the first with the original line-up since 2003.

“We are pretty excited for the year to come,” declares guitarist Terry Corso. “We just came off of a three-month tour in the U.S. that made us realize that with the original line-up back together, we have fire and hunger again. That being said, we can hardly wait to hit the studio and start putting a new record together. We’ve been writing on and off for the past year and have a really good pile of new material. Basically the goal is to write another pile. With a fresh new collection, we hope to get our core fans excited, as well as turn some brand new listeners on to the ALIEN ANT FARM sound and show the world we have a lot more to offer than the average rock band.”

“The timing of ALIEN ANT FARM signing to Executive Music Group is priceless,” said EMG President Jacob Capricciuolo. “During a time where EMG is exploding and our philosophy is to ‘hustle,’ I feel together success is imminent. I couldn’t be more proud of their work ethic and their willingness to do whatever it takes to be successful.” As EMG Vice President Jimmy Swan continues: "For 10 years, I have used ALIEN ANT FARM's ‘Smooth Criminal’ to show all my bands the perfect example of how to cover a song. Being a huge fan of the band, it is an honor to be able to work with them. Having the original members back in the line up will give the fans what they have been waiting for.”

The Southern California band started their music career in 2001 with ANThology, which was released on Papa Roach’s New Noize imprint on DreamWorks Records. Thanks to the #1 single, “Smooth Criminal,” the album reached double-Platinum status. 2003’s truANT, produced by Stone Temple Pilots’ Dean and Robert DeLeo, cracked the Top 25 and “Glow” hit #1 on charts outside the U.S. despite the imminent folding of its record label. The band has toured all over the world with Linkin Park, Metallica, 311, and Papa Roach, and has sold over 3.5 million records worldwide.