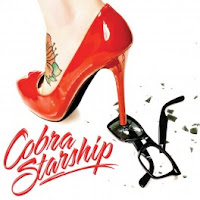 Cobra Starship
Night Shades
Fueled By Ramen/Decaydance
The pop sensibilities of Gabe Saporta seemingly know no bounds, a skill set of the enigmatic frontman that was mostly overlooked during his tenure fronting the criminally underappreciated Midtown. Well, no more because Night Shades, the latest release from Saporta’s day job Cobra Starship has effectively severed any and all ties the band might have had to the realm of pop-punk.
‘Don’t blame the world/it’s the DJ’s fault’ Saporta exclaims on the track of the same name, just one of the never-ending stream of dance floor inspired club anthems that makeup Night Shades. The albums opening track, “You Belong to Me,” is more than confusing (it might be the bands most confusing track they’ve ever written), though it takes not but a few minutes before the club bangers start to fall like rain, starting with the single “You Make Me Feel…” featuring Sabi and the subsequent “#1Night (One Night).” From there, deep 808 drops, deliciously recycled beats, endless amounts of synth and enough Auto-tune to make even T-Pain smile continues throughout every last drop of Night Shades on tunes likes “Anything for Love” and “Disaster Boy,” the latter being the song that keyboardist Victoria Asher makes her lead vocal debut on.
Chock it up to the bevy of guest appearances from the likes of Sabi, the Plastiscines, Jump Into the Gospel and Mac Miller, or the star-studded stream of co-writers including American Idol’s Kate DioGuardi and OneRepublic’s Ryan Tedder, or simply chock it up to the talents of Cobra Starship, but anyway you look at it, Night Shades is a good times nothing short of irreverent and frivolous, and no, that’s not a bad thing. And while Night Shades might ultimately be devoid of any actual substance, if you attempt to read between the lines too much and go into this album looking for anything else but to have fun, you’re missing the point. Just press play, and enjoy – just remember to put on your dancing shoes first.
Grade: B
Go Download: “Don’t Blame the World It’s the DJ’s Fault”
Email Post
Labels: cd reviews cobra starship