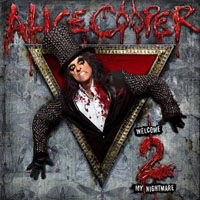 Is it possible that with his latest, and 26th, album, Welcome 2 My Nightmare, and after nearly five decades in the business, that Alice Cooper has not only not lost a step, but gained some in the process? The simple answer is yes. Welcome 2 My Nightmare is not a reboot, but a follow-up to 1975’s Welcome to My Nightmare, and not only is Cooper up to his old macabre tricks again, he is even resurrecting some familiar faces from his past, including members of the original Alice Cooper Band (Dick Wagner, Steve Hunter, Dennis Dunaway and Neal Smith) and producer Bob Ezrin.

The result of all this nostalgic feel is the very modern sounding Welcome 2 My Nightmare, an album that is classic Cooper is two ways – first, it is a euphoric cacophony of potpourri style sounds, and it has a running theme. The albums’ story finds Alice losing his battle to stay awake and getting dragged through hell on another nightmare, this one involving runaway trains, a welcoming congregation and a sex-starved she-devil.

Whatever you do, do not stop listening after the very out of lace and confusing opener, “I Am Made of You,” a song that features some noodling piano balladry and (gasp!) auto-tuned vocals. From here on in, Welcome 2 My Nightmare stays weird, as you would expect from anything Alice Cooper related, though the sparkling chemistry and interplay between Cooper and Ezrin is always prevalent. “Caffeine” returns listeners to familiar ground, before the synth-tastic “Disco Bloodbath Boogie Fever” shatters your psyche, proving that you really can’t ever know what to expect with Cooper, especially on Welcome 2 My Nightmare. The highlights continue to fall from the sky as the album progresses, like the expansive psychedelia of “the Congregation,” low rumbling menace of “When Hell Comes Home” and blistering solo-laden “Runaway Train” in which country legend Vince Gill provides lead guitar. All this happens even before Cooper teams with pop outlaw Ke$ha on “What Baby Wants,” an out and out trash-fest that should effectively blow both your speakers and your mind. The closing “Gotta Get Outta Here” wraps up Welcome 2 My Nightmare with a shiny, bloody bow in climactic fashion, but you’ll have to listen to believe it.

Welcome 2 My Nightmare is surprisingly great, and considering that the album offers something for pretty much everyone sonically, it is one of Cooper’s best records ever.