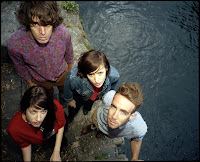 After a slew of critically acclaimed singles and well-received shows both here and in the UK, the quartet of Roxanne Clifford, Patrick Doyle, James Hoare and Marion Herbain, otherwise known as Veronica Falls are returning this autumn with their much anticipated self-titled debut LP, to be released in September on Slumberland.

With their debut album, Veronica Falls have crafted a brilliantly concise, superbly concentrated hit of spiky, marvellously contagious indie pop with a twist - these are songs which will lodge themselves in your head as well as your heart, with style and attitude to burn. You'd do well to surrender to their eerie spell.