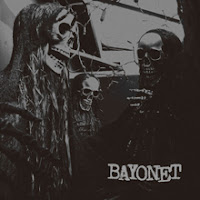 Bayonet
Bayonet
Mightier than Sword Records
Those of the thought that Senses Fail frontman Buddy Nielsen had lost his fire as of late vocally (see SF’s last two releases Life is Not a Waiting Room and the Fire), best come correct and check out his new (well, sorta new) digs Bayonet and their fiery, unabashed self titled debut EP. To fill out Bayonet’s ranks, Nielsen assembled sort of an unheralded hardcore supergroup, calling upon the services of Jeremy Comitas (ex-the Banner), Paul Klein (Suburban Scum) and Will Putney (Fit for an Autopsy) in order to deliver the hardcore manifesto that is Bayonet.
Bayonet is 11 minutes of spite-filled hardcore with a strong punk lean that sees Nielsen spitting venom more often than not, though it’s those moments of clean serenity (a minute into “Nightmare” and the opening stages of “Harsh”) that will have you thinking Nielsen forgot which one of his bands he was actually singing for. While those clean melodies detract a bit from the overall proceedings, there is more than enough material here to get you back in the dance pit. From the vitriol-laced “Black Bird” to the flat-out piss-fest that is closer “New York Minutes,” Bayonet delivers spastic grooves, chugging guitar riffs unafraid to explode into a full-on gallop, and pummeling, floor punching breakdowns (1:50 into “New York Minutes” – you’ve been warned).
You really can’t go wrong with an album that ends with the lines ‘I hate myself/I hate my fucking self,’ just one of the many selling points of Bayonet, an EP coming soon to a VFW Hall near you.
Grade: B+
Go Download: “New York Minutes”
Email Post
Labels: bayonet cd reviews