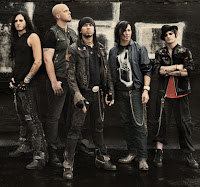 The band even went as far as to tear up their old record contract on stage during their performance at Rock On The Range festival earlier this month before announcing their new home.

The band has enjoyed early success with their hit single "Last Man Standing" which peaked at #5 on the active rock charts. War Of Angels will be the follow up to Lipstick on the Mirror which was released in 2008.