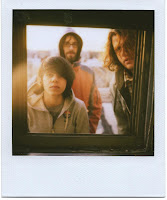 Since the release of their critically acclaimed fourth album Castle Talk in September 2010, Screaming Females has been a whirlwind of relentless touring including supporting Ted Leo across the U.S., 5 weeks in Europe, and headlining tours stateside. Their hard work has also landed them coveted spots opening for Yo La Tengo, Titus Andronicus, Dinosaur Jr and The Arctic Monkeys, to name a few. 2011 has seen the underground band bring their uncompromising sound to a mainstream audience with their network TV debut on "Last Call with Carson Daly" and appearances at SXSW. Through it all, Screaming Females have continued to make a name for themselves with their raucous live shows, driven by front woman Marissa Paternoster's famed guitar heroics, while maintaining their punk rock sensibilities.