Free Music Friday! The R's - "I Love My Family" 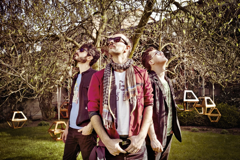 When it comes to hotbeds for indie music culture, Italy probably isn't the first place that comes to peoples' minds. But with all three of The R's members originating from Brescia, Italy, that reputation is about to change.

Their sound is an encapsulation of time. Rock and folk influences from the 1950s up to the present day can be found in The R's addictive indie tracks. From the a-side of one of two soon-to-be-released 7-inch records, "Easy Way Out" is an upbeat blend of '70's FM radio and contemporary folk. Flip over to the b-side and you'll find a modern indie-pop vibe infested with catchy hints of reverb-coated 1960s surf rock.

And the appeal is obvious. The R's won a music contest sponsored by Italy's most widely read newspaper back in 2007 and released their first EP. Since then, the Italian band have released the album Money's On Fire, collaborating with producer Giovanni Ferrario (P.J. Harvey), and gained a large following in their home country after being featured on a major national advertising campaign and receiving exposure on MTV Italy.

The subsequent 7-inch that they will be releasing features the expertly-crafted track "I Love My Family." Its bright chord progression jumps with each staccato strum and is accompanied by a hopping and syncopated percussive rhythm. There are trails of Elvis Presley in the articulation of Pierluigi Ballarin's lead vocal lines, and the track is soaked in punk rock inspiration.

The R's are now signed to Nat Geo Music, the record label of the National Geographic Society, and are preparing to make their U.S. debut in the late Spring with the release of their latest album De Flora Et Fauna.
Email Post
Labels: free music friday the r's