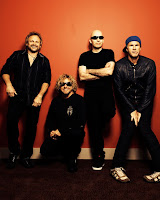 CHICKENFOOT's 2009 Gold-certified, self-titled album debuted at #4 on the Billboard Top and included the hit “Oh Yeah.”

Alan Grunblatt, President of eOne Music, says, “Chickenfoot is one of the top selling hard rock groups in the country. Everyone at eOne is thrilled to be working with them.”

CHICKENFOOT lead singer Sammy Hagar adds, “I am very happy to join forces with eOne. The Foot has landed!”