Free Music Humpday! Thieves Like Us - "Your Lovr Runs Still" 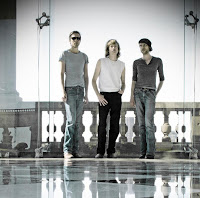 Thieves Like Us are two Swedes (Bjorn Berglund and Pontus Berghe) and one American (Andy Grier) drifting around the planet. After moving to Paris in 2008 to record last year's LP Again and Again, French authorities refused a VISA to vocalist Grier and he was forced to relocate from Paris to Berlin. The band continued to meet for touring throughout Europe in 2009 and 2010.

The Your Love Runs Still EP is the first sample of new material which includes the expanded line-up of Frenchman Laurence Wasser on bass and American Martine Duverglas on co-vocals. The band will be playing shows in South America and Mexico this summer before reconvening in Lisbon to record their first full length LP for Brooklyn label Captured Tracks.