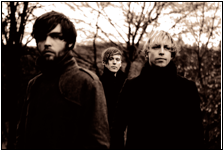 White Belt Yellow Tag are essentially the creation of Justin Lockey (ex Yourcodenameis:Milo) and Craig Pilbin, who formed in 2008. Lockey had built up a reputation as one of the UK’s leading new band producers having worked with White Lies and Late Of The Pier. With unashamedly big, anthemic, booming pop personality, their sound has been met with critic-slaying acclaim. It’s two guys who like massive sounding music. And they aren’t alone.
Self produced and mixed by Chris Potter (The Verve, Blur), further endorsing their audible caliber. Craig’s soaring vocals have already earned comparisons to Mark Hollis from Talk Talk and Ian McCulloch. The addition of Tom Bellamy (a multi-instrumentalist formerly of The Cooper Temple Clause) as a full-time member on drums has furthered the bands expansive sound.

MP3: http://download.themusebox.net/white_belt_yellow_tag
While their debut album Methods saw it's release in the UK in summer 2010, on May 10,  White Belt Yellow Tag are releasing their US debut EP, You’re Not Invincible through MB3 Records. The four-track EP features the tracks "You’re Not Invincible", "Remains," "Pictures All The Same" and "You’re Not Invincible (Losers Remix)." What started the uk frenzy with WBYT is “You’re Not Invincible” a tune that Zane Lowe discovered on the bands myspace and started playing the demo version on his Radio 1 Show. Once  "You’re Not Invincible" EP was released Zane gave it the accolade "hottest track in the world" after it had won 'Fresh Meat'. Another classic tune, "Remains", is not the first WBYT tune to win Steve Lamacq's rebel playlist, he invited the lads on his "My new favourite band feature". This single was Sean Mckeaveny's single of the week on the 6music Breakfast Show and strangely won 'Video of the week' on Cerys Matthews Radio show.  Lockey had bumped into Pilbin up in Newcastle; Lockey knew his way around a studio and Pilbin had a bunch of songs he wanted to try out. The two consequently began working together and the relationship soon developed beyond producer and writer, as they shared duties playing all the instruments rather than waste time recruiting a band. Within weeks they had amassed a bunch of amazing songs that teetered somewhere between the glacial grind of Slint and the soaring majesty of Doves – dramatic, tense and uplifting. WBYT are currently in the studio working on new material.