Review Rundown: Against All Will, Pushking, the Material, Go Radio, Ekotren 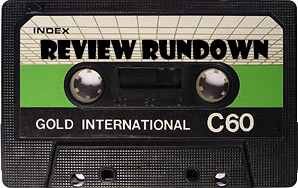 This Review Rundown offers reviews of recent albums from Against All Will, Pushking, the Material, Go Radio and Ekotren.


File Under: Hard Rock
Against All Will – A Rhyme and Reason (Stereo Supersonic): Against All Will are far better when A Rhyme and Reason sounds like a record from a rock band full of promise – think A New Revolution, Alterbridge (“Swept Away,” “Discard You,” “the Drug I Need”) than when they venture into frivolous and highly unnecessary nu-rock territory, coming off as something of a Nickelback or Puddle of Mudd b-side (“All About You,” “Let Go”), two distinct sounds that really define A Rhyme and Reason. The record is far better when things are kept heavy by way of lofty hooks, churning guitars and pounding drumming as opposed to those moments when the band resorts to mainstream gimmicks. A Rhyme and Reason is a release that puts Against All Will on the map, making them a band to pay attention to, and now it will be interesting to see where the band goes from here. You got our attention guys, now what’s next? (http://www.againstallwill.com/)
Grade: B-

Go Download: “Swept Away”
﻿
﻿
File Under: Star-Studded Classic Rock
Pushking – the World as We Love It (Armoury): If you can believe it, Pushking’s latest album, the World As We Love It, is a literal collage of revered superstars, featuring contributions from the likes of Alice Cooper, Paul Stanley (KISS), Billy Gibbons (ZZ Top), Steve Lukather (Toto), Steve Vai, and Joe Bonamassa, just to name a few. Never heard of Pushking? Well, with the World as We Love It, that should change. For this album the Russian band took some of their best work, tweaked things a bit, and then translated it all into English for a result that is a tidal wave of pure classic hard rock not to be missed. With this record no two songs are the same - everyone a stand-out. It’s clear that Pushking’s melodic blues-tinged rock and roll clearly suits the needs of its multitude of guests, no matter if its walking on the heavier side of the tracks (“Nature’s Child”) or engaging in full-on gang warfare (“Kukarracha”) If ever there was a way to make a good impression with rock fans outside of their native country, the World as We Love It is it. If nothing else this band knows how to make one hell of a first impression. (http://www.pushking.eu/)
Grade: B
Go Download: “Nightrider”
﻿
﻿

File Under: Slick Hard Rock
The Material – What We Are: Yes, the Material is fronted by a woman (Colleen D’Agostino), so let the cavalcade of comparisons begin. Sure, those unfamiliar with the band could think of them as something of a less-tweenie version of Paramore or not-so-alternative Flyleaf, or hell, even what Eyes Set to Kill would sound like if Cisko Miranda left the vocal work up to Lexia and Anissa, but despite whatever opinion or comparison you formulate, it doesn’t take anything away from the fact that the band’s debut LP What We Are is nothing short of striking. This is a passion fueled vehicle driven in large part by D’Agostino, whose display of honest sentiment bleeds forth from What We Are, giving the record a breadth tantamount to almost anything else being put out by female fronted bands today. What We Are shows the Material have the capacity and ability to succeed whether it be through driving moments complete with soaring, ultra-melodic hooks (“Appearances,” “Stay Here Forever,” “What We Are”) or when D’Agostino lets her emotions do the talking, balladeering akin to the best in the business (“A Bird Without Wings,” “Let You Down,” “I’d Be Lying”). Well, the fact is, the Material did their part by releasing a record the caliber of What We Are, now it’s just up to you, and the scene, to take notice. You should probably hurry up before your friends beat you to it. (www.myspace.com/thematerial)
Grade: B+
Go Download: “A World Outside”
﻿
﻿

File Under: Powerpop
Go Radio – Lucky Street (Fearless): Go ahead Mayday Parade fans, you have license to hate. Honestly, how could you not stand to be a bit pissed after listening to Lucky Street, the debut long player from Jason Lancaster’s new plaything Go Radio? How could you not sit back and think about what could have been if Lancaster not left the MP fold to kick start Go Radio? Well, that’s what could have been, but what is, is Lancaster and Go Radio have released a powerpop record to beat in 2011 with Lucky Street, and you’re stuck listening to the underwhelming Anywhere But Here. Eh, what’re you going to do, right? Really though, what you should do is go pick yourself up a copy of Lucky Street. Feeling a bit sheepish about the decision? Go download one song – “Strength to Stay” – in order to sway the vote a bit, just one of many songs that’ll make you realize getting a copy of this debut is a wise choice. Looking past that particularly small sample size of Lucky Street, this record is stacked top to bottom with songs that aren’t afraid to allow the combination of crunchy guitars and Lancaster’s sturdy vocal bravado take center stage (“Kill the Beast,” “Any Other Heart”) and moments of endearment that have Go Radio waxing emotional complete with bleeding hearts on sleeve (“Forever My Father,” “House of Hallways”). As far as full length albums go, Lucky Street is as good as they come, and in terms of debuts, this is easily of the best ones to come across in a long time. Hopefully for Go Radio, and for all of us, this is the start of a long and beautiful relationship. (www.myspace.com/goradio)
Grade: A
Go Download: “Forever My Father”
﻿
﻿

File Under: Metal
Ekotren – the Dead Of Night

(Burnhill Union): If you’re indeed able to somehow survive the first bombastic barrage, “the End of the Day,” off Ekotren’s latest, the Dead of Night, then you better buckle up, because you are in for one hell of an intense rise. In fact, if you’re not prepared for the onslaught, then the bands blend of blast-beat double bass, razor sharp riffs and Pass Out of Existence-era Chimaira-esque vocals from frontman John Sheldon will surely cut you in half. The Dead of Night is a literal sonic buzzsaw that may spend some time borrowing soaring, guitar-driven hooks from the likes of Bullet for My Valentine or early Unearth (“Light to Shine,” “Can’t Stay”), though Ekotren dedicates the majority of the record to a prominent swagger all their own (“Blackened Sky,” “the Suffering”). No, the Dead of Night is not prettied-up metalcore, or fashionable deathcore. This is straight-up metal that actually lives up to the hype. Actually, speaking of, the Dead of Night is Ekotren at their best yet. Chances are, once you press play, you will not be disappointed. (http://www.ekotren.com/)
Grade: A-
Go Download: “The End of the Day”
Email Post
Labels: against all will cd reviews ekotren go radio pushking review rundown the material