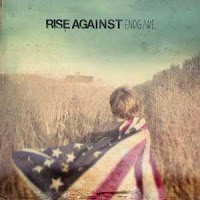 With 2008’s Appeal to Reason Rise Against tossed their collective hat into the ring of mainstream success and viability, and after one spin of the band’s latest, Endgame, it appears there is no turning back. Now, that’s no to say that Rise Against had to set out to reinvent the wheel in terms of sound, but it’s just that, they didn’t do anything new with this record – they didn’t take any chances. No, the band didn’t have to revolutionize themselves just to be fashionable as seems to be the trend nowadays (yes, Linkin Park, looking at you here), but any release that showed some balls would have sufficed. Sadly, Endgame is not that release.

Endgame picks up where Appeal to Reason left off; literally, pretty much sticking to the same formula that elevated them to near hard rock royalty in the first place. To say Endgame is the same release as Appeal is a bit of a stretch, but not as much as you’d think. The same structures are here, the same modus operandi, thanks large in part to the production duo of Bill Stevenson and Jason Livermore, who return to the mixing board to fill the same seats they occupied on Appeal in order to deliver the same result.

This collection of songs are about what you’d expect – socio-political fueled tirades that come across as deliberate and altogether controlled, meant to elicit the fists of the masses to be raised to the sky in unison, though the work itself isn’t always that radical and endearing. At times Endgame is listless and mundanely repetitive ("Help is on the Way"), at times it’s chugging and anthemic ("Midnight Hands"), but the record is no better represented than fiery opening salvo "Architects," a track that puts on display the feverous lyricism of frontman Tim McIIrath, a moment in time that has McIIrath waxing nostalgic to the tune of Against Me!’s "I Was a Teenage Anarchist."

There seem to be two schools of thought with Endgame. Is this record a passionate, socially conscious, angst- addled diatribe? Or is it just a bunch of songs from a group of posers well-versed in the art of commercial exploitation? Well, that all depends on what Kool Aid you decide to drink.