This new version of the Review Rundown offers reviews of the latest players from Australia’s Drawn from Bees, Die Krupps, Astral Doors, the Aquabats, and Birdsong at Morning. 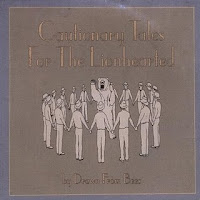 Drawn from Bees – Cautionary Tales of the Lionhearted (Bonefinger): Cautionary Tales of the Lionhearted, the latest EP from Australia’s Drawn from Bees, tows the lines between throwback progressive art rock and straight up pop-rock, though judging by these new tracks, it seems as if the former heavily outweighs the latter. Borrowing from the likes of yesteryear greats like David Bowie (and to a lesser extent the Cure), Drawn from Bees combine tried and true influence with some other contemporary acts like Arcade Fire in order to craft their sound, a sound no better exemplified than on Cautionary Tales of the Lionhearted, a record littered with mid-range, mellow tempos, jangly, angular guitars, and most of, pure emotional bravado. At times the EP is too frivolous and ultimately disposable (“Long Tooth Setting Sun”) and intuitive and ethereal (“the East Wood Fox”), while at others it is comforting and overwhelmingly convivial (“Picture Show”) and bouncy, melodic and downright marketable (“Waiting for the End”). No matter how you look at it, Cautionary Tales of the Lionhearted is an album ripe for consumption, one that's able to come across smart without any pretentiousness, a characteristic that makes the work mostly endearing. (http://www.drawnfrombees.com/)
Grade: B+
Go Download: “The East Wood Fox” 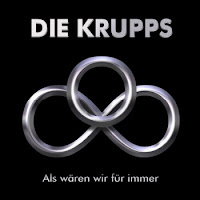 File Under: German Industrial
Die Krupps - Als Wären Wir Für Immer (SPV): Three decades into their career and still kicking, not to mention recently removed from a 15 year hiatus, Die Krupps are back and they are not coming empty handed. Armed with a new ‘mini-album’ in Als Wären Wir Für Immer (As If We Were Forever) that comes fully equipped with five new tunes and three remixes, Die Krupps show that a decade and a half spent in the abyss has not wrecked their swagger, and they surely have not lost a step along the way. This much is evident right away with “Beyond,” a track that re-introduces the bands driving, pulsating beats to the masses, before “the Chameleon Man” and the title track do the best to encapsulate the bands trademark industrial/EBM sound. Als Wären Wir Für Immer is evocative and airy, managing to remain thoroughly energetic across the board. It may be just a ‘mini-album’ as the band calls it, but it’s also an exclamation point – welcome back Die Krupps. (www.myspace.com/diekrupps)
Grade: B-
Go Download: “The Chameleon Man” 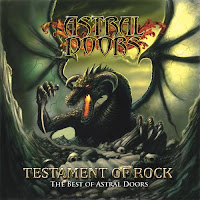 File Under: Power Metal Unaware It Isn’t the 80’s
Astral Doors – Testament of Rock: the Best of Astral Doors (Metalville): Astral Doors wants you to think it’s 1985. But, alas, it is not – its 2011, but don’t tell that to these Swedish power metal revivalists. With five long players and an EP under their belt, they felt it was an appropriate time to unleash a greatest hits record, Testament of Rock: the Best of Astral Doors. If you go into this album not knowing perhaps who you are listening to, you might come away thinking you’re listening to a Dio cover band, but rest assured you are not. Astral Doors are pumping out some of the best arena ready power metal you’ve never heard, though that time might soon find its end. With triumphant tunes like “Of the Son and the Father” and “Black Rain,” Astral Doors are rekindling our love affair with all things soaring metal, and with Ronnie James Dio’s vocal doppelganger Nils Patrik Johansson at the helm of the bands revivalist party, this band should have a pretty bright future ahead of them. Testament of Rock: the Best of Astral Doors gives you the best material the band has put to wax throughout their career, and whether they are copping the pace and force of Iron Maiden (“Bride of Christ”) or coming across as a Dragonforce clone minus the blazing speed (“Power and the Glory”), this best of compilation shows Astral Doors has the goods. Be sure to stick around to the last track “Victory,” a song the band themselves call ‘a majestic hockey anthem.’ (http://www.astraldoors.com/)
Grade: B+
Go Download: “Of the Son and the Father” 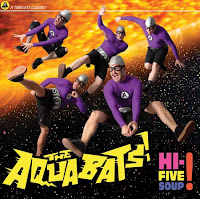 File Under: Pop-Punk W/A Sense of Humor
The Aquabats – Hi-Five Soup! (Fearless): Anytime you can successfully meld the likes of over-the-top cartoon imagery, blatant pop-punk and Biz Markie, you’re onto something, and such is the case of Yo Gabba Gabba vets the Aquabats and their latest release, Hi-Five Soup! The new release from the children’s programming favorites sees the band is by no means perfect, though it isn’t without its fair share of worthy tunes. Hi-Five Soup! is a record that essentially blurs the line between kitschy pop-punk and something of the Kids Bop variety, and whether the album is prancing through fields of 8-bit melodies (“the Shark Fighter!”), calling on fellow Yo Gabba Gabba contributor Biz Markie for some vocal help (“Radio Down!”), or letting their synth do the talking (“Poppin’ a Wheelie”), its evidently clear that Hi-Five Soup! is all about having copious amounts of fun. This record is literally fun for all ages, one that you can safely sing along to with your kids. (http://www.theaquabats.com/)
Grade: B-
Go Download: “Poppin’ a Wheelie” 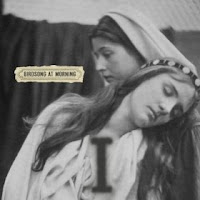 File Under: Acoustic
Birdsong at Morning – Annals of My Glass House (Blue Gentian): Birdsong at Morning’s Annals of My Glass House is about as lush and vibrant as soft-spoken acoustic music comes, not to mention as artful as perhaps anything you’ve pumped through your speakers in the past. There is no doubt that Annals of My Glass House is a much better work when the band keeps things mellow and low key, as evidenced by some of records better cuts in “Heartland” and “Light in the Window.” Album opener “Those Beautiful Words” isn’t just a tune with a clever title – it really is what it says it is – beautiful words, easily the records most sparking moment, and one that sets the pace and tempo for the rest of Annals. The songwriting throughout is honest and introspective, which makes most of these songs worth listening to in the long run. Annals of My Glass House is a record that manages to be artful without being pretentious, one thing that most art rock bands cannot say for their releases. (http://www.birdsongatmorning.com/)
Grade: B-
Go Download: “Those Beautiful Words"
Email Post
Labels: astral doors birdsong at morning cd reviews die krupps drawn from bees review rundown the aquabats