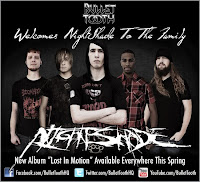 Bullet Tooth is excited to announce the signing of NightShade! The label's first ever band from France will release their new album Lost In Motion this Spring followed by a lengthy US tour. Though the band is located in France, NightShade's singer, Wayne Hudspath, is actually from Ohio. The new album featuring the songs "Rebellion", "Through The Memory", and "A Dream, A Choice, A War" are crushingly heavy but with a spellbinding melodic structure. NightShade's new material has been compared to At The Gates and Children Of Bodom with a contemporary twist. Fans can listen to a two minute teaser of the new album at their Facebook page.

Guitarist and songwriter Bastien Deleule commented on the signing, "Everyone in Nightshade is excited to be working with our new label Bullet Tooth and its owner, Josh Grabelle. We've come to know him well the last few months and his track record with many successful metal acts like It Dies Today, First Blood, Bleeding Through, and more, speaks volumes. We feel confident in the new album and we hope everyone will enjoy listening to them, because we had a great time making them. See you on the road!"
NightShade is: