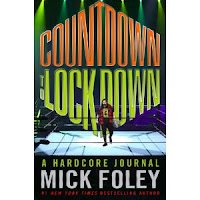 If you were one of the very, very many people who read Mick Foley’s the Hardcore Diaries, then you’ll have a pretty good idea of how his new book, Countdown to Lockdown: a Hardcore Journal reads.

In his first post-WWE book and second diary-style memoir, Countdown to Lockdown details the events of Foley’s life leading up to what he refers to as ‘the biggest match’ of his career, at TNA Lockdown 2009, facing Sting for the World Championship.

As a side note, this match was limited, given its participants and didn’t exactly live up to the hype the company attempted to build around it. I get it, TNA wanted to give this match that classic big match feel, though after viewing the match itself, you’ll (well, maybe) see it failed to live up to the considerable hype.

Ok, now back to the book.

Foley is as brilliant and effervescent as he has even been throughout Countdown, and though he gets carried away on some topics – including meeting Tori Amos and explaining how meeting her changed his life – and his fear of Kurt Angle – who Foley finally locked horns with at TNA’s Victory Road 2009, though it’s not covered in the book – going in-depth into two frivolous topics don’t exactly take away from the overall ebb and flow of the book.

Foley’s talks about leaving the WWE and Vince McMahon, as well as drug use in the industry, he refers to the Chris Benoit murder-suicide situation as a black eye on the industry, and again, it is refreshing to see another wrestler (Chris Jericho wrote a chapter about Benoit in his latest book Undisputed: How to Become the World Champion in 1,372 Easy Steps) reference Benoit and offer insight on the situation.