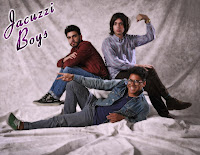 In a smart move by both parties, Hardly Art and the Jacuzzi Boys have joined forces at long last! The band will head into Key Club Studios next week to record their debut Hardly Art LP, which will be released later this year.
Born of the swamp and sun in early 2007, the music of the Jacuzzi Boys roosts like a bad vulture somewhere between the hazy shade of the coconut palm and the fevered neon of the Magic City. This is raucous pop of the murkiest order-jangling guitars, caveman drums, and songs of sex and seashells, dead animals and birthday cakes. Dragging behind in their dusty wake, the Jacuzzi Boys come bearing a string of 7" singles that did nothing if not forecast the twelve-song tornado of their debut LP, No Seasons, released in 2009 by Florida's Dying. The next full-length LP

from the Jacuzzi Boys will be released on Hardly Art this fall. If 2010 was any indication, 2011 is the year the Jacuzzi Boys come busting out of the tropics, naked as the gator and twice as toothy.