Free Music! Hunx and His Punx - "Too Young To Be In Love" 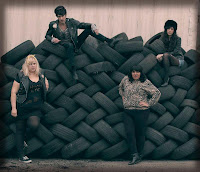 Too Young To Be In Love also marks the first time the group has ever been comprised entirely by "punkettes"-another name for the all girl band that band leader Seth Bogart (aka Hunx) always dreamed of. Shannon Shaw (of Shannon and the Clams) plays bass, and wrote three of the album's songs. Her powerful voice on "Lovers Lane" and "The Curse of Being Young" crackles and breaks with a raw ferocity that perfectly compliments Hunx's swoon-worthy nasal croon. This album also represents a distinct reversal of roles-the all-girl quartet (Shaw, plus guitarist Michelle Santamaria, drummer Erin Emslie, and Amy Blaustein on guitar/organ) bring the fire... while Hunx brings the softness-the sweet, oh so sweet, sugar. All of the ladies sing on this album, and their voices combine to create some modern Wall of Sound magic.

Hunx and his Punx will street Too Young To Be In Love via Hardly Art March 29.