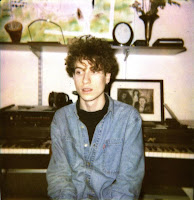 Keen followers of Yuck may remember a limited-edition cassette release last summer, under the cheeky name of Yu(c)k; titled "Weakend" and released on Mirror Universe Tapes, it took a sharp left from the scuzzy indie pop gems the foursome are renowned for producing, and was, instead, a collection of pared down, austere piano ballads which were devastating in their stark simplicity and unflinching beauty.

Oupa, the new project from Yuck frontman Daniel Blumberg, picks up right where that EP left off, and is, in actual fact, an expansion/immersion of all things Yu(c)k. Continuing on from the sombre, heartbreaking likes of "Daughter" and "Automatic", the debut LP Forget, set to be released in June, collects together 7 tracks of haunting fragility, utterly spellbinding songs with a specific, direct hotline to the heart, mesmerizing in its air of hushed, sacred reverie, almost too intimate to bear witness to. The pervading atmosphere is one of loss and regret to be sure, but the songs transcend any easy categorization by virtue of being too idiosyncratic, too sublime, too timeless.

Oupa will release Forget in June.