Chris Jericho - Undisputed: How to Become the World Champion in 1,372 Easy Steps 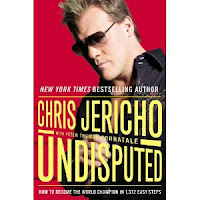 Undisputed: How to Become the World Champion in 1,372 Easy Steps

As a wrestler, getting kudos from perhaps the best pro wrestler/writer today, Mick Foley, must feel pretty damn good. Having Foley admit he was afraid that you’re a better writer than him must be a feeling that is near unimaginable. Such is the case of Chris Jericho, and such praises were sung by Foley (referring to Jericho’s first book A Lions Tale) in the foreword of Jericho’s new book, Undisputed: How to Become the World Champion in 1,372 Easy Steps.

Undisputed is as good a book-written-by-a-wrestler as I’ve ever read, and perhaps the most entertaining. It picks up where A Lions Tale left off, as Jericho takes the reader on a whirlwind ride beginning with the now-famous Monday Night Raw segment in which Jericho debuted in WWE and interrupted the Rock in an iconic moment that effectively set the wheels in motion on one of the most heralded careers in WWE history. Jericho continues this great read with stories of run-ins and verbal spars with Vince McMahon and the heat he had with locker room leaders like the Undertaker and HHH. It was also interesting to hear how Y2J turned to WWE Hall of Gamer Pat Patterson in order to guide him to elite, main event level status.

It isn’t all WWE related, as anyone who knows anything about Jericho knows he has his hands in a lot of different pots, one of them being music, where he is lead vocals for the band Fozzy. For some reason he tells a story about long-forgotten (at least I thought so) nu-metallers American Head Change (who the hell knows that band existed but me?), but it’s the story about Sharon Osbourne that takes the cake in this section of the book. I could go into more detail, but let’s just say it involves some profanities and Zakk Wylde – you have to read it to believe it.

Personally, for me, it’s when Jericho recalls his times as Drunkicho that are the best, though the stories aren’t all peachy keen and rosy. The stories are exciting, though again, no spoilers here. Buy the book.

Undisputed is as in-depth as they come, and one need look no further than the chapter about the passing of his mother for that fact. For me, it was particularly hard to read from an emotional standpoint, but the best chapter in the book saw Jericho speaking about Chris Benoit. It was brilliant that unlike WWE, Jericho chose to admit Benoit existed and hearing him recalls stories with Benoit before and after the murders is truly something special.

He doesn’t always have his facts straight though, as any good smart mark will surely notice. He wrote that he wrestled William Regal at WrestleMania X8 (but it was WrestleMania X7), that he won the first ever Undisputed Championship at Vengeance not Armageddon, and that at Fully Loaded 2000 Perry Saturn wrestled Eddie Guerrero with Chyna at ringside instead of Chyna versus Saturn.

Jericho is as honest and accessible as can be throughout Undisputed, and though Mick Foley might not like it, Jericho is as close as ever in his rearview, if not completely on par with him. If Foley isn’t careful Jericho could pass him as the best wrestler/writer going today on his next book, which Jericho deliciously left the option open for with Undisputed.
Email Post
Labels: 372 Easy Steps book reviews Undisputed: How to Become the World Champion in 1