With their Identity on Fire, A Skylit Drive Look to the Future: A Conversation with Michael ‘Jag’ Jagmin of ASD 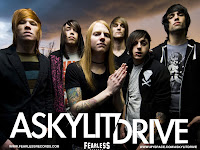 It may be an arguable point to some, but with a sparkling new record in Identity on Fire, and a slot on a prominent national tour alongside the likes of Thursday and Underoath, it’s hard to argue that Lodi, California’s A Skylit Drive (www.myspace.com/askylitdrive) aren’t at the top of their game. Identity on Fire finds the band with as balanced a sound as they have achieved thus far in their young career, causing some to proclaim this new disc the bands strongest work to date. For this new opus, ASD went bigger, and better, and also went with a new producer in Cameron Webb (30 Seconds to Mars, Flyleaf), a man who hasn’t exactly worked with many of ASD’s peer in terms of sound. The Webb experiment worked – just pop in Identity on Fire for proof, as his presence can be felt up and down the record, though it’s clear the band stepped their game up considerably for this recording. Is it their best work to date? Well, that’s something you’ll have to decide for yourself.
Identity on Fire is also a disc that comes with a good amount of symbolism – the lyrics, the title, the artwork. What does it all mean, and how much of a struggle was it for ASD to follow-up an album (2008’s Adelphia) that enjoyed some quality chart successes?
Frontman Michael ‘Jag’ Jagmin sits down with Get eXposed Music to tell us.


Get eXposed Music: When you first joined A Skylit Drive you technically beat out Craig Mabbitt. What was that whole experience like, and did you know that you were competing against Mabbitt?
Michael ‘Jag’ Jagmin: Well, that’s not exactly true actually. It’s sort of a rumor. He (Mabbitt) hit them up for an audition but by that point, I was already in the band. It never really got to the point of him auditioning for the band. I never really had any competition with anyone – I auditioned and then the next day they asked me to join the band.

GE: Your latest, Identity on Fire, in on store shelves now. Is there a story behind that album title, and if so, is it perhaps a metaphor for the band currently?

Jag: The whole meaning behind the album and the title is to set fire to everything bad that is going on in your life, things that are bringing you down and making you a person you don’t want to be. It’s all about making your own identity and being exactly who you want to be no matter what anybody says.
GE: I was wondering if it was a metaphor for the bands identity currently.
Jag: Well, yeah, for sure. We all live by that through our music. Nowadays, everybody is a critic; everybody’s always trying to tell you what to do, but for the most part we’re going to do what we want to do since that’s what’s going to make us happy and that’s what got us to where we are. We’re going to keep sticking to our guns, doing what we like to do. Not one of our records is the same. We want to keep evolving and keep changing little things in order to become a better band.

GE: Speaking of symbolism, how about the album artwork. Is there a story there?

Jag: The whole idea behind the album cover and the artwork is our rendition of the infinity symbol. Things can last as long as you want them to last as long as you work hard to make them last. We wanted to have this post-apocalyptic vibe where the whole world has ended, and even though everything has hit an all time low, we’re still fighting, we’re still moving, and nothing is going to stop us.
GE: Tell me about the recording process of Identity on Fire. How did that go for the band?
Jag: It was long, hard and it was stressful, but definitely fun at the same time. We were pushed like we had never been pushed before because we’ve never really a fully hands-on producer before. That was a lot different to be sure to have Cameron [Webb] there, but it was really nice because it was kind of like having a coach who could guide us to where he thought our talents would work best together.
GE: Speaking of Cameron, how did you land on him, and what exactly did he bring to the table for A Skylit Drive, since he hasn’t exactly worked with a lot of bands like yours in the past.

Jag: Well, we first got randomly placed with him to do our cover song for the Punk Goes…Classic Rock CD (Journey’s “Separate Ways (Worlds Apart)”). It was a blast to work with him – he was easy to get along with and he was really driven and excited to make the best possible music he could make with us. We loved the outcome; it was a really positive experience working with him. And shortly after we did the cover song, we had to start thinking about who we wanted to do our whole album with and the only guy we all thinking about was Cameron and I could never believe that we ended working with him.
GE: Your last record Adelphia enjoyed a good amount of chart success. Was it a tough task to try to create a follow-up record, or did that thought not even enter your mind when you were in the studio this time around?
Jag: Yeah, that definitely entered our mind. We had to think about what would be a smart move for us as a follow-up, and had to think about what would take us to the next level and open us up to a broader fan-base. Adelphia was our experimental album, and we went way out of the box to see what we could get away with and find what we like, and Identity on Fire is like getting grounded again musically, and finding that new sound that we feel a lot of people can relate to both musically and lyrically. We couldn’t stress enough that we needed to make the album that we needed to make. One that would give people what they expected of us, but at the same time one that would throw them a curve.
GE: Sticking with that, what new approaches did you take this time around with Identity on Fire that you didn’t on Adelphia? 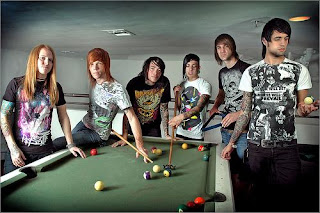 Jag: The writing was pretty much similar, but we spent more time on this album, not to mention we had Cameron there to tell us what sucked, what was good, what part should go where and what we needed to do more or less of. We went into recording with a labyrinth of songs and came out with structures and songs that were better put together. And that’s one huge difference – this time around we paid a lot of attention to structure, whereas on Adelphia we just sort of winged it and went with our gut. With that record, we wrote it in a month and then recorded it in a month, and the whole process was just fast. There was really no time to think what was good or what was right or wrong. With Identity, we had a couple of summers to write it and then we were in the studio for a month and a half and about a week and a half of that was spent on pre-production. We had a lot of time to go back and make sure that we loved every part.
GE: Did you have a whole new set of influences for you as a songwriter when you went into this record?

Jag: Honestly, I’m not really that influenced by music, I’m more influenced by movies and the like, but vocally I usually try to take what I had done on a previous record and not necessarily top it, but just try to do something even more different. With Identity, I just went back and looked at what I did on Wires...and the Concept of Breathing and Adelphia and sat back and asked myself, ‘what have I never done that other people would like and that I would like?’ Hopefully people like this new stuff as much as we do.
GE: In December you tweeted that the tune "Ex Marks the Spot" was your favorite off this record. Does that statement still stand, and if so, why?
Jag: Oh yeah, definitely – that song is my baby. That is definitely my favorite song on the whole album and I have high hopes for that one. It bullshit when singers get asked that question and say every song is their favorite. I have a lot of favorites but there is always that one song that really rings true to you. Every guy in the band has that one song that gives them chills when they listen to it and you just get that much more pumped when you listen to it. Songs like that are the ‘golden egg.’
GE: Is there something specific about that song for you or do you just get that feeling overall from it?
Jag: I honestly don’t know what it is. When we first started writing it, it was one of the more difficult ones to get the right parts to, but when we got done and I got to hear the vocals put together, I was like ‘wow,’ and I had no idea that’s what we were making. I didn’t realize it was going to be like that. I think it just one of those songs that encompasses everything we do. It literally has a little bit of everything we have ever done mixed with all of the new stuff we have brought in. It has everything that everyone knows us for and way more.
Email Post
Labels: a skylit drive interviews