Anthrax’s Scott Ian and Rob Caggiano, Fall Out Boy’s Andy Hurley and Joe Trohman, capped off with Keith Buckley of Every Time I Die, aka the Damned Things (www.myspace.com/thedamnedthings), makes for an entertaining evening to begin with, and add to that the Mohawk Place and a warm February night, and you have the makings of a classic rock show. And that it was. The show was sold out for the Damned Things inaugural soiree in the Queen City, one of many to come hopefully. 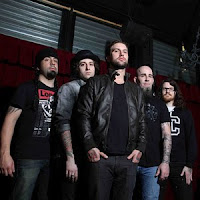 Their set was excellent, plain and simple. I desperately wanted a cover of FOB’s “Sugar, We’re Going Down” because I thought it would have been absolutely hilarious, but the cover we did get was almost as good – Quicksand’s “Fazer.” Other than the tossed in cover, the set was most everything off their one and only record, Ironiclast, a set that included tunes such as “Handbook for the Recently Deceased,” “Friday Night (Going Down in Flames),” “A Great Reckoning,” “Little Darling,” “Ironiclast,” “Grave Robber,” and eventually closing out the tight, raw 40 minute set with single “We’ve Got a Situation Here.” The crowd was most excited for “Bad Blood,” calling for it from the moment the band took the stage. And speaking of the crowd, they were rabid, singing along to every single word emitted from the Buckley’s lips. No encore, no frills. That’s what the Damned Things are about, and this show proved that.
All I can say is I hope this is one of many times the Damned Things come to Buffalo. This city needs more rock shows like this one.
Email Post
Labels: concert reviews mohawk place the damned things