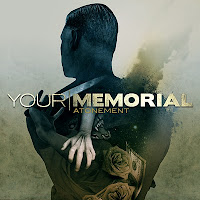 Atonement, the Facedown Records debut of Your Memorial, is a face-melting blast furnace of the good kind of metalcore (not the scene-addled cookie monster kind), showcasing the fact that this Twin Cities product has the chops to effectively hold their own, though for the most part they could be viewed as a poor man’s Misery Signals.

For one reason or another, Atonement plays host to not one, not two, but three instrumentals, offering the listener little more than a break from the metallic onslaught, and if nothing else, three tracks to skip. The rest of the record boasts above average songwriting, which makes up for the shortcomings of the predictable structures throughout, and while the heavier side of Atonement very much outweighs its melodic side, there are a number of tracks that offer some nice symmetry (“Hope Era,” “Atonement,” “Not Fallen”). As is the formula for most releases of this ilk, Your Memorial doesn’t forget to toss in some clean singing to counteract the screaming, though only one track (“Surface”) follows that suit. The lack of clean singing is a bit discouraging, ultimately leading to a lack of standout tracks, since for the most part these tunes with bleed together. “Unseen” is about as close as one might get to a highlight track due to its punishing rhythm section and speaker shattering breakdowns, but one single track can’t save the rest of the work.

Your Memorial’s sophomore release isn’t a great release, nor is it anywhere close to a terrible one, falling somewhere in-between, causing it to come across as somewhat forgettable beyond a first listen. It is encouraging however, showing the fact that this band could be in for a bright future.
Email Post
Labels: cd reviews your memorial