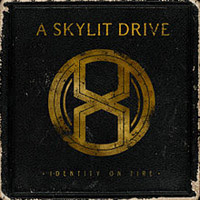 A Skylit Drive is a band that knows how to get the most out of each of their six parts. With their third studio release, Identity on Fire, they were able to garner an even-keeled blend of all things melodic, heavy and electronic. And unlike some of their scene counterparts (IE Attack Attack, I See Stars), A Skylit Drive knows how to let their electronic tinges enhance their sound as opposed to completely drowning it out and muddying things.

With Identity on Fire ASD has effectively built upon the evenhanded screamo/post-hardcore sound they began trending towards a few years back on their successful 2009 release Adelphia. Identity on Fire is a record from a band in ASD that sounds as if they finally have found themselves, and found a sound they can call their own. Perhaps the most important thing about this new record is that it doesn’t ultimately sound regurgitated. The riffs, the breakdowns, the electronic interludes – they all sound fresh and overwhelmingly inviting, not to mention the dynamic vocal leadership of Michael ‘Jag’ Jagmin, who himself delivers his best vocal performance of his young career on Identity on Fire.

It may disappoint some though that Identity on Fire tends to be a bit more melodic than naught overall, though that fact doesn’t make this an album to be immediately dismissed. It does however make this record the catchiest material ASD has yet to record. It’s not all melodic pomp and circumstance however, as two of the albums latter entries (“Tempt Me, Temptation,” “Identity on Fire”), register as two of the most badass tunes ASD has committed to wax yet, and hell, the former might just be the most beastly intro of any ASD song. The rest of the album is worthy of multiple listens as well as there’s a reason Jagmin went on record stating that “XO Skeleton” was his favorite off Identity (check out the killer breakdown midway through), and the following tandem of “Conscience Is a Killer” and “Ex Marks the Spot” do their part to add some beefy bite to go along with ASD’s sizeable bark. And on the synth front, do your best to catch the Orgy inspired intro of “the Cali Buds,” but do your best to skip the Euro-dance style intro of “If You Lived Here, You’d Be Home.”

Honestly, with the balanced sound presented forth here on Identity on Fire, it shouldn’t be much of a stretch to proclaim this disc as the bands crowning achievement to date.