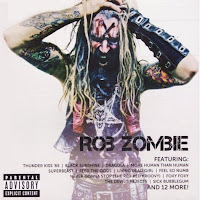 Ok Rob Zombie, we get the message loud and clear – you’re incredibly talented. As if your first pair of greatest hits compilations, Past, Present and Future and the Best of Rob Zombie, weren’t enough to hammer that blatantly obvious point home, you drop a new career spanning comp. in Icon 2 to remind us all.

Dating back to his time fronting the venerable White Zombie, we all knew this guy had what it took to be special, and the first portion of the first disc of Icon 2 should serve as a reminder with six WZ classics – "Thunder Kiss 65," "Black Sunshine," "Supercharger Heaven," "More Human Than Human," "Feed the Gods," and "The One," a tune which makes its first appearance on a Zombie greatest hits release. It would have been nice to have seen "I’m Your Boogeyman" included as opposed to the tried and true, mostly predictable, tracks, but hey, beggars can’t be choosers.

Flash forward a number of years to find Zombie setting out all by his lonesome, beginning with his solo debut, the unbelievable Hellbilly Deluxe, and while Icon 2 doesn’t offer up many surprises in terms of track listing, this time around the brilliant "Meet the Creeper" is included, a tune that features one of the most badass riffs then-guitarist Mike Riggs ever shredded. The second disc of Icon 2 kicks off with a few tunes from Zombie’s sophomore disc the Sinister Urge, before moving on to the vastly underrated and mostly overlooked Educated Horses, an album that garnered the inclusion of a whopping five tracks. "Foxy Foxy" sees its greatest hits debut, as Educated Horses is also represented by the tremendous "American Witch," "the Devils Rejects," "Let It All Bleed Out" and the title track of Zombie’s upcoming new movie, "The Lords of Salem." Hellbilly Deluxe 2 closes out the work with three tracks – "What?," "Sick Bubblegum" and finally, a previously unreleased version of "Mars Needs Women."

Icon 2 is a great two-disc set, something that should have been very evident initially. While it would have been advantageous for Zombie perhaps to change up the rather predictable track listing this time around, the simple fact remains that this group of songs kicks ass, and will kick your ass time and time again.

max said…
Hello,
It is usually always worth request for your hired band regarding it is opinions, You will not have planned a great wedding before,best budget dj speakersbut they may have lots of experience ALONG WITH knowledge. whether or not you make use of chosen your current correct band for the very first place, an individual will certainly obtain This they think down your current same lines Just like people AND do things only how you just like them