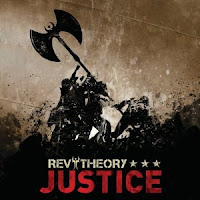 Rev Theory’s latest full length, Justice, not only describes the bands true mantra in a single word, but it effectively picks up almost exactly where the bands sophomore record Light It Up left off. Though Justice isn’t without its predictability (there aren’t many mainstream hard rock bands nowadays making unpredictable music), it effectively builds upon the foundation that the bands previous works have laid (and yes, count the bands’ debut Truth Is Currency debut, even though that was in the pre-shortened Revelation Theory days).

Justice follows along the same lines as Light It Up in terms of structure, though one glaring difference would be that the band chose to move the uber-ballad, this time around entitled "Hollow Man," to the end of the disc, unlike the tune "Broken Bones," which batted cleanup on Light Up in the fourth slot (though a case could be made for Light It Up’s closer "Far From Over" being a ballad). All unnecessary semantics aside, if you’re willing to not read too much between the lines, you’ll quickly find that Justice is a densely-packed, straight-forward hard rock powerhouse, one that doesn’t require too much of its listeners as it steamrolls from track to track, leaving one intense explosion after another in its wake. The bands blend of enormous, soaring hooks driven by the astute vocal bravado of frontman Rich Luzzi and pinpoint accurate riffs is undeniable throughout.

The structures here are as expected and pretty simple, though that shortcoming doesn’t take anything away from the overall product that is Justice, because, plain and simple, these songs kick ass. The trio of "Dead in a Grave," "Justice," and "Remedy" gets things underway with such feverous aplomb, before the "Far From Over"-esque duo of "Hangman" and "Fire" temper the pace, but that’s only temporary, as evidenced by the following tune "Loaded Gun." But for as good as Justice is, it may not get any better than the subsequent two songs, "Enemy Within" and "Wicked Wonderland." Yes, the latter is as cheesy and clichéd a tune as Rev Theory has ever penned, but through all of its passé nu-rock feel, there is a certain underlying bombast that’s truly hard to ignore. Following what could be easily referred to as Justice’s only lull, the semi-transparent, but equally endearing and heart-wrenching closing ballad "Hollow Man" wraps the disc in a tidy little bow.

If you’re a fan of Rev Theory already, or just a follower of their given genre, then Justice is logically the next record you should have on your shopping list. Well, at least it should be.