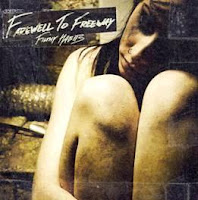 Filthy Habits, the latest from balls-out melodic metalcore merchants Farewell to Freeway (how about that alliteration kids), shows that you don’t always have to have your ear to the ground and be the first to jump on the bandwagon of some new and trendy noise, as this record is a flat-out shred-fest of old school metalcore (you know, back when this genre was the sh*t?). Filthy Habits is reminiscent of those days when Keith Buckley and the rest of the Every Time I Die crew were skating around and owning roller-rinks (circa 2003 and their metalcore opus Hot Damn!) or for those slow to the draw, the Curse-era Atreyu. And another difference between Farewell to Freeway and those bands looking to jump the shark by copping some new sonic moves – this is real. There is no Autotune, no 808’s, no muddled, unnecessary electronics (except for the synth-y intro to “Tokin’ Aint Weezy,” which by the way sounds plucked straight outta Lil’ Wayne’s “Lollipop”). Filthy Habits is grown man metal, full of punishing, swirling guitars unafraid to dabble in intricate technicalities that lay the bed for the serious vocal work emanating from the lead-lined throats of both Adam and Chris Lambert (no, not that Adam Lambert). The hooks soar as a result, and though you may knock Farewell to Freeway and Filthy Habits for being a tad too melodic in nature, you cannot deny the band for embracing what this album really is – a straight ahead, floor shattering, pit inducing metal onslaught. Odds are you’re already in love with most of their contemporaries (the afore mentioned ETID and Atreyu and even Underoath and Norma Jean), so why not add Farewell to Freeway to that list?