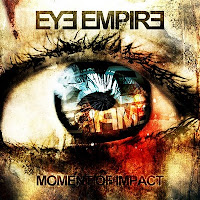 From Stereomud to Dark New Day (with a brief stop in Switched), bassist Corey Lowery has long associated himself with uber-talented acts, and his latest band, hard rock/nu-metal supergroup Eye Empire, is no different. Comprised of the likes of Donald Carpenter (Submersed), Will Hunt (Skrape, Dark New Day), B.C. Kochmit (Switched, Dark New Day) and Lowery, the band’s debut, Moment of Impact, is sonically indicative of the members previous affiliations, and serves effectively as Eye Empire’s introduction to the hard rock scene.

Carpenter’s vocals dazzle throughout Moment of Impact. Hard rock fans, if you’ve yet to hear his previous band Submersed, shame on you (go pick yourself up a copy of their 2004 debut In Due Time). His vocals sound as sharp as ever, leading the charge into the band’s excellent, soaring hooks, towering above all else on the record time and time again.

Eye Empire does a solid job on Moment of Impact of infusing a heavy dose of melody without sacrificing intensity and hard-hitting aplomb, and though the structures are pretty standard, resulting in the lack of a discernable ebb-and-flow, the record does present a number of highlight tunes (“I Pray,” “Idiot,” “Victim (Of the System)”), though it does fizzle out near the end (“the Great Deceiver,” “Last One Home”). This record delivers exactly what you as a hard rock and modern nu-metal fan would want – copious amounts of crunch and high-arching hooks, a combination that’s surely hard to argue with.

Moment of Impact may not be perfect, but it’s a great first attempt. It remains to be seen what impact Eye Empire will make in the future, but it’s clear that their moment is now.