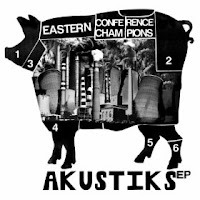 After years of toiling in the underground (though their music found its way on TV on ‘Melrose Place,’ ‘Friday Night Lights,’ ‘Gossip Girl’), Philadelphia’s Eastern Conference Champions literally burst onto the scene when their tune “A Million Miles An Hour” was included on the Twilight Saga: Eclipse movie soundtrack last year. Looking to capitalize on their new found notoriety, the band has released a new EP, Akustiks, ahead of their upcoming long player, Speak-Ahh, due out this April.

Akustics sees the band ramping up just that, the acoustic factor, through six songs of both old and new material. “Middle of the Night” opens the EP with ECC’s classic Americana/indie rock feel, which blends elements of folk and minimalism, before the albums clear-cut standout, “Bristol Road,” takes center stage. If you can make it through the unnecessary opening (you’ll have to hear it to understand), the rest of the offering can only be described as beautiful and endearing, if not painfully emotional. The acoustic version of “Silo” included here vastly outshines that of its non-acoustic predecessor (off the Sante Fe EP), though the same cannot be said for the acoustic version of closer “Single Sedative,” which just doesn’t comes across with the same bleeding heart zeal as the rock version included on the bands 2007 release, Ameritown.

The acoustics approach of this EP works well with the bands composed indie rock nucleus, and should serve as a solid holdover until the band drops their sophomore full length, Speak-Ahh this spring. There’s really no question that any fan of the band should have this EP in their record collection.
Email Post
Labels: cd reviews eastern conference champions