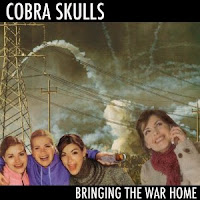 Bringing the War Home, the Fat Wreck Chords debut EP from Cobra Skulls, is a handful of classic politico-punk fired out of the barrel of a gun that rarely takes its foot off of the gas pedal throughout its five tracks. Sure, one of them may be a cover (Bad Religion’s “Give You Nothing”), a tune that seemingly has the panties of critics and fans alike in a bunch since it was previously released for free on Germs of Perfection: a Tribute to Bad Religion, but honestly, who the hell cares? If the cover sucked it would be one thing, but since the complete opposite is true (it kills), it should be a non-issue. Regardless, Bringing the War Home showcases the fact that Cobra Skulls are still as socially conscious and politically aware as they’ve ever been, transitioning from topics like immigration (“ICE in the Night”), a scathing retort about the practices of United States Immigration and Customs Enforcement, to (obviously) war (“Doomsday Parade,” “Hot Sand”), with pinpoint precision. The EP’s closing track, “Life in Vain” offers a rock and roll vibe complete with big hooks, closely resembling the band’s work on their 2009 release American Rubicon.

You won’t find many slow tempos here on Bringing the War Home, which is something that should please more than few Cobra Skull fans. The band doesn’t waste any time or space here, and if this EP is indicative of what their upcoming long player will sound like, apparently everyone is in for a treat. It may be an arguable point to some, but with Bringing the War Home, Cobra Skulls have never sounded better.
Email Post
Labels: cd reviews cobra skulls