‘On Your Side’ For a Good Cause: A Rocket to the Moon’s Andrew Cook Talks Tour, New Music and Beyonce

You’d think gearing up for your first ever U.S. headlining tour would rattle you as a band, and shake you to your very core. If it does, then obviously you’re not a member of A Rocket to the Moon (http://www.arockettothemoon.net/). Though the band has shared the stage on multiple coast to coast tours, never before have the boys gone on last and played until the house lights come up night in and night.
Well now they will get their opportunity to do just that.


ARTTM will hit the ground running March 15 for the ‘On Your Side’ tour, named after their 2009 Fueled by Ramen long player, alongside the likes of Valencia, Anarbor, Go Radio and Runner Runner. The tour will have ARTTM playing in front of crowds in some of the country’s largest markets, including New York City, Philadelphia, Cleveland, Denver, Baltimore and Los Angeles.
You should also know that you, the fan, will be getting more out of your price of admission on the ‘On Your Side’ tour, as not only will you be treated to a fresh set of killer jams night after night, you’ll also be helping a good cause, as ARTTM have teamed with the Keep a Breast Foundation for the forthcoming run, a non-profit organization aimed at helping to eradicate breast cancer through education.
The man behind the skins, Andrew Cook, took some time away from prepping for ARTTM’s seriously important upcoming tour, in order to speak with me about the ins and outs of the ‘On Your Side’ trek, the bands recently streeted Rainy Day Sessions EP, and, what else, Beyonce.
Get eXposed Music: You’re prepping for your first ever North American headlining tour, the ‘On Your Side Tour,’ kicking off March 15. You’ve got to be nervous, right?

Andrew Cook: Not really, no! I suppose there are nerves involved the first couple nights when you really don't want anything to go wrong, but we’re more excited than anything. We have waited a long time for the chance to do a proper headliner and give our fans the show they've been waiting to see! 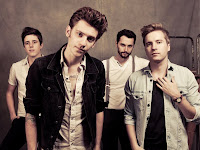 GE: Now, you’ve always been a band willing to give back. Tell me about teaming with the Keep a Breast Foundation for this tour. Is this organization something near and dear to your heart, or do you think it’s just a good cause?
AC: A little of both. I've been fortunate that my family hasn't struggled with breast cancer, but sadly I can't say the same for the families of some of my closest friends. Everyone has been impacted by the disease in some way, and we want to do our part to help raise awareness and money that will hopefully lead to a cure.


GE: You’re hitting the pavement with bands like Anarbor, Valencia, Runner Runner and Go Radio in tow, which themselves are some pretty good acts. What’s it like to sit and think that you will be the band that takes the stage last and rocks out until the house lights come up? That’s got to be a pretty humbling feeling.
AC: It sure is. We are privileged to share a stage with those bands, and humbled that they've elected to support us. All around, it’s going to be a great tour full of not only good bands but good people as well.

GE: What will the setlist look like night in and night out? Will it be a mix of old material and new, or, since the tour is named after your latest long player, will it be primarily comprised on newer stuff?
AC: All I can say is we are sincerely gonna try to give the fans what they want. We are gonna mix it up with old and new, and do our best to leave our fans with the feeling that it was worth the wait to see us headline. I'm most looking forward to playing for more than 25-35 minutes a night finally!!

GE: You recently streeted a new EP – the Rainy Day Sessions EP – via iTunes. Tell me what inspired you to re-imagine these songs? And did they turn out the way you had initially hoped?
AC: They turned out pretty much exactly as we had hoped. We are fans of folk and country music, and we wanted to re-imagine some of our songs with the likes of the Lovell Sisters. They were a big part of what inspired us to try it; just knowing they were down to be involved. 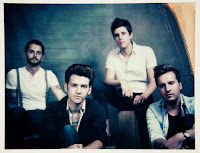 GE: Speaking of the Rainy Day Sessions EP, I obviously have to ask about the cover of Beyonce’s "Single Ladies (Put a Ring on It)." What brought about this cover and how much fun was it to lend your own sound to it?
AC: One night we were all at my house in Massachusetts, and I said to Justin [Richards], ‘we should cover “Single Ladies” but make it a folk song,’ or something along those lines. He went to my basement where it was quiet, figured out the progression, and came up with this cool finger picking pattern. He came up and played it for us, and we instantly knew we had to follow through with it.
GE: Has Beyonce heard the tune by any chance?
AC: We aren't too sure. We would love for her to hear it. We were thrilled when Bruno Mars heard and liked our "Billionaire" cover, so you can imagine hearing that Beyonce dug our "Single Ladies" cover would be just incredibly rewarding and humbling. Send it her way! (laughs)
GE: After the ‘On Your Side’ tour wraps, what else does 2011 have in store for ARTTM?
AC: Lots of writing and recording! We are super anxious to make a new record and create the next permanent impression in our band's history. Making records is one of our favorite things to do as musicians. There's no experience quite like it. Then once we finish that, hopefully some more touring before the end of 2011.
Email Post
Labels: A Rocket to the Moon interviews