Linkin Park Once Again Stunning North of the Border

It had been a decade since the last time I made the trek north of the border to Toronto, Ontario, Canada in order to see Linkin Park (http://www.linkinpark.com/) dazzle on stage, and just as they did way back at Ozzfest 2001, LP again was stunning and awe-inspiring, this time (Feb. 8) sharing the same stage as both the Toronto Maple Leafs and Toronto Raptors, the Air Canada Centre, as they continuously prove night in and night out they are one of the best live touring acts today.


LP was near brilliant throughout their set, and even though I’ve seen them grace the stage five times before, they never cease to amaze me, this time coming to the live arena equipped with an astonishing new record in A Thousand Suns, though they didn’t get to the new material until three or four songs in, which was perhaps the most surprising thing about the show. The band kicked the night off with “Papercut,” the lead salvo off their debut Hybrid Theory, before transitioning into other radio hits like “No More Sorrow” and “Given Up,” with Meteora’s “Lying from You” tossed in as well. It was semi-surprising the band didn’t open with “One Step Closer,” which was something they had been doing in tours 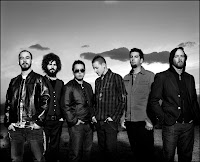 past, though they did end their regular set with it. Also included throughout the set – “Numb,” “Breaking the Habit,” “In the End,” “Shadow of the Day,” “New Divide,” “Faint,” “Waiting for the End,” “the Catalyst,” and the standout highlight tune of the night, “When They Come For Me.” The band ended their encore with “Bleed It Out.”
No covers to be had, but none were needed. I was looking forward to more material off of A Thousand Suns, but beggars can’t be choosers I guess. Still, it was that new material that went over the best, and seriously though, LP’s rendition of “When They Comes From Me” with Chester Bennington and Brad Delson manning their own drum kits, was one of the best performances I’ve seen the band give yet.

One thing is for sure, this show left me hungry for me, and suffice to say, I’ll be anxiously awaiting the next time Linkin Park take the stage anywhere close to my neck of the woods. Hopefully I won’t have to wait too long.
Email Post
Labels: air canada centre concert reviews linkin park