Free Music Friday! The Soft Moon - "When It's Over" 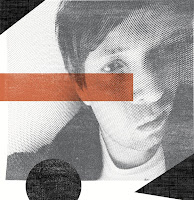 On the heels of two sensually dark 7 inches, Luis Vasquez of The Soft Moon, released his self-titled debut full-length on Captured Tracks, on November 16th, 2010.

Raised under the burning sun of the Mojave desert, Vasquez channels both his punk upbringing and Afro-Cuban heritage to sculpt decidedly dystopian soundscapes for a new generation of torn romantics. It's a record set somewhere in the near post-apocalypse where technology enchants as much as it destroys. The sound palette in particular harks backs to the sonic experimentation of krautrock and early post-punk. But an urgent sense of futurism pulls The Soft Moon out of nostalgia and towards some uncanny sort of new florescent void on the horizon. Globular synth melodies dance over a guzzling motorik beat reminiscent of Neu! Bass guitar riffs fissure and crack. Chants, whispers, and echoed screams wave in and over the empty space, equal part mourning of loss and prophetic of life yet to come. Recommended for paranoid train rides in a post-apocalyptic world.