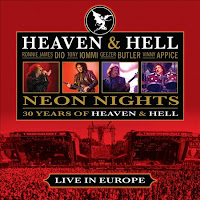 Their time together was somewhat short-lived, Heaven and Hell aka Black Sabbath less-Ozzy Osbourne and plus Ronnie James Dio (drummer Bill Ward was also replaced with Vinny Appice), but the band definitely left an indelible mark on the annals of music history, a near-legendary presence that can be felt throughout the bands new live DVD offering, Heaven and Hell: Neon Nights: Live in Europe.

If you are of the crowd who only knew the Ozzy-led Sabbath, then you're surely missing out on what Dio was able to accomplish with the renamed Heaven and Hell (due to legal reasons, of course). Dio was able to pick up the ball and run with it as it were, not only expanding but completely redefining the band’s sound, opening them up to a new world of fans.

Heaven and Hell: Neon Nights: Live in Europe is the perfect display of what Dio achieved. Filmed at the 2009 Wacken Festival in Germany, this is the last recorded concert footage of Dio doing what he does best, a concert for the ages, one surely not to be missed. Though Heaven and Hell are a bit sloppy and raw at times during the concert, those flaws are borderline indelible as the band plows through a set of the bands best work, including newer cuts like 'Follow the Tears.' 'Mob Rules,' 'Die Young,' 'Heaven and Hell' and 'Neon Knights' combine to steal the show, though there isn’t any passable material here.

Heaven and Hell: Neon Nights: Live in Europe's extras are also noteworthy here. The DVD comes with an hour's worth of interviews with band members that sees them discuss the complete history of Dio's time in Sabbath, how their albums were written and recorded, and all of the reunions as well as the breakups in candid detail. Also included are brief one-minute tributes to Dio by Iommi, Butler, and Appice.

This DVD is a fitting tribute to Dio and his ultra-unique skill-set, one that is surely a must-own for fans and well-wishers alike, though newcomers to the Heaven and Hell party might want to start elsewhere to get yourself up to speed on the Dio-fronted Sabbath years.