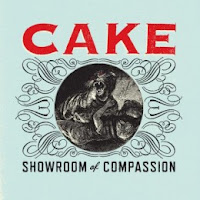 Normally, when a band takes as long a hiatus from recording and releasing new material as everyone’s favorite quirk merchants Cake does (7 years, give or take), they use that time away to attempt to redefine their sound and reinvent themselves. Well, consider Cake the exception to the norm, and use their latest full length, Showroom of Compassion, as evidence to that fact.

The indie darlings were last seen way back in 2004 when they were releasing Pressure Chief, and since then it appears they’ve done more refining than redefining in terms of sound. That much is evident moments into the records opening salvo, ‘Federal Funding,’ a track that will remind you of everything that initially made you a fan of Cake’s off-kilter alt-indie pop/rock, and no, the title isn’t just clever, as frontman John McCrea takes this time to profess his views on government bailouts and the like. Though McCrea went on record prior to Showroom of Compassion to say that “this record will sound very different,” tunes like ‘Long Time,’ ‘What’s Now is Now’ and ‘Easy to Crash’ show otherwise, delivering Cake on record in all their sonic glory, full of life, sun-drenched melodies and impressive vocal harmonies. The instrumental ‘Teenage Pregnancy’ is an interesting cut due to its combination of creepiness and all-around overt-circus-ry, and the alt-country ‘Bound Away’ is another nice departure from the typical Cake sound, though the closing track ‘Italian Guy’ does a fine bringing things back to earth, and even classes things up a bit with some violins and piano.

All in all Showroom of Compassion is more than an amiable reintroduction to the band, and considering they spent the last 7 years in near-oblivion, this is a pretty damn good expiation, one that hopefully will bring back those to the flock who may have strayed during this downtime. And for those who you who might be using Showroom of Compassion as a preamble to the band Cake, while there might be some better jumping off points in the past releases, this one is an alright place to start. Enjoy.