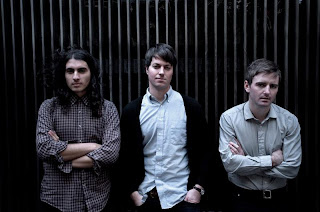 Within a grainy film-still between a summer sunset and the end of times lies the post-punk squall of Weekend. Weekend filter the aggression, tempo and sneer of punk through a wall of reverb, haunting melody, feedback and primitive garage guitar. Formed in San Francisco in late 2009 by three childhood friends, the band have quickly developed a totally distinctive take on the history of post-punk noise rock. Some touchstones along the way include the chaotic psychedelic noise of groups like Skullflower and Terminal Cheesecake, the bad vibes power-drone of "Feed Me With Your Kiss"-era MBV and No Age, and the scything racket of post-No Wave noise bands Dustdevils and Sonic Youth.

Where many bands who share similar influences are content to bludgeon the listener with noise, Weekend pay special attention to texture and atmosphere, and leaven even the most riotous moments with unexpected shards of melody. Weekend have instinctively staked out a unique sonic territory where feedback guitars, crunching riffs and pounding rhythms are harnessed in the service of, rather than in opposition to, their haunting tunes. Says singer Shaun Durkan: "Our goal has always been to balance the abrasive qualities of punk and noise with something more introspective and vulnerable. Creating that simultaneous push and pull. Like the beauty of an oil fire."

They're rapidly developing a reputation for their stunning live shows, and gigs with bands like label mates The Pains of Being Pure at Heart as well as Japandroids, A Place To Bury Strangers, Little Girls and SF compatriots Young Prisms are drawing crowds of ever-increasing size and devotion. Prior to their Slumberland release, they dropped two ecstatically-received and now sold-out releases: a fantastic 10" single on Mexican Summer and a split single with Young Prisms on the excellent UK label Transparent. Their debut double-LP Sports was released November 9, 2010 on Slumberland Records.