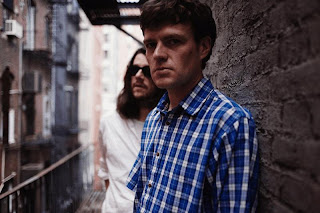 Pete Nolan has been Spectre Folk since before drumming and strumming in Magik Markers was his main gig, and will be Spectre Folk long after he shuffles off this mortal coil. The main benefit of ghost folk is, you can play it way after you're dead, and while you're alive the Spectre can haunt any decent willing body with a gift for the unreal. This time around fellow Michigander Steve Shelley (Sonic Youth) ran drums, Peter Meehan (The Grey Lady) glued guitar and Aaron Mullan (Tall Firs) slithered bass in the Folk, creating an alchemy the Spectre hasn't floated since the days of basement wig wearing, in the short-lived Norman Bates-era.

The band entered Echo Canyon West with the intention of recording a 7" of the "up-tempo" version of "Blackest Medicine," the title cut from the 2007 home-fi Woodsist debut. After several sessions, they emerged with a four song studio collage monster that won't fit in your locker and smells like smoked banana peels and undies blowing down an alleyway. A vibraphone, piano, and a plate reverb unit the size of a brooklyn apartment were all employed by the Spectre like Uri Gellar used spoons, inappropriately, desperate and bent. They physically turned the 2 inch reel of tape over so Peter Meehan could put subliminal backwards masking under his Erkin Koray worthy guitar solo on "4th Dimension Refs"and Nolan put the Temple Screamer to good use on tracks one and two, using samples of Shirley Temple Black's 'Good Ship Lollipop' as vocoder harmonies on choruses. As far as we know, this record also features the first gong solo by legendary skinsman Steve Shelley, since the gong heavy debut Crucifucks LP.

Oh yeah, it's full of burning psych-pop jammers too! Earmarking Nolan's long standing but unspoken obsession with personal hygiene, "Keep Your Teeth Clean!" is a krauty suite that betrays Shelley and Mullan's recent stint as the rhythm section for Neu! Their teutonic influence has the effect of putting the dreamy psych-fuzz that Nolan exhibited on last year's Compass lp through a blender.. with a frog... that spills out into a wide open milky wayhead zone. You can't snuggle with this record, so strap yourself in and feel the G's! Fearless as a lemming, Nolan has created a private universe here, a Society of the Spectre-cal if you will, and his gift is his freedom. Let's have a drift.