Free Music! The Pains of Being Pure at Heart - 'Heart in Your Heartbreak' 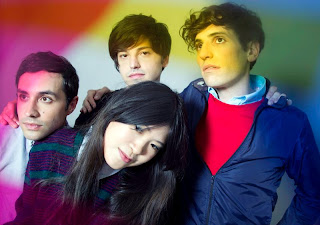 The Pains of Being Pure At Heart had quite a run over the last twenty two months. They released their self-titled debut in Feb. 2009 to universal acclaim, racking up features in magazines like Spin, Rolling Stone and NME, earning Best New Music status from Pitchfork, and touring the US and Europe non-stop. Now the band has announced a major Spring tour in support of its sophomore album, Belong, due in late March on Slumberland with amazing support bands Twin Shadow (4AD) and Catwalk (Captured Tracks) joining them for select portions of the tour.

STREAM: "Heart In Your Heartbreak" -
http://soundcloud.com/forcefieldpr/the-pains-of-being-pure-at-heart-heart-in-your-heartbreak

STREAM: "The One" (B-side to "Hearbreak" single) -
http://soundcloud.com/slumberland-records/the-pains-of-being-pure-at-heart-the-one

All the while they've been working on new songs, releasing the excellent single "Say No To Love" in June 2010 and beginning work on their eagerly-anticipated second album. To help bring this new batch of tunes to life they've enlisted the help of producer Flood (Smashing Pumpkins, U2, PJ Harvey) and ace mixer Alan Moulder (My Bloody Valentine, The Jesus & Mary Chain, Ride). The result is a massive sounding album, sonically ambitious but still grounded in the peerless song-craft that The Pains are known for.

"Heart In Your Heartbreak" is the first preview from the new album, and it's a perfect snapshot of where the Pains are headed in 2011. An infectious slice of chunky power-pop with a great beat, sweeping synths and well-placed guitar jangle, it's immediately obvious that the new production team has brought out the best in the band. It's pure Pains all the way, but bolder, louder and more confident. On the flip, non-LP track "The One" is a classic-sounding rocker that would sit just fine next to Teenage Fanclub on any well-compiled mix tape. All in all a superb single and a great taster for that second album, due for release in March 2011.