Free Music! The Moondoggies - 'What Took So Long' 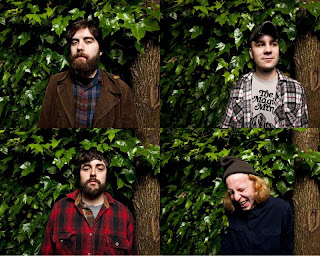 There is something inherently calming about large bodies of water. In times of emotional duress, standing at the edge of an ocean watching the waves roll in and out, centers the spirit in a way that standing on terra firma cannot. Kevin Murphy (lead vocals, guitar) chose to title the Moondoggies' new album Tidelands in part because of a remote area outside his old stomping grounds of Ketchikan, Alaska where he used to go to escape from civilization. More importantly, as the sly recurring themes of water throughout the Seattle quartet's second full-length underscore, these are songs crafted to provide solace, sense, and cause for celebration in a world fraught with turmoil.

MP3: "What Took So Long" -
http://www.hardlyart.com/mp3/MD_WhatTookSoLong.mp3

VIDEO: "Empress of The North" -
http://www.youtube.com/watch?v=n4CyXkNb69k

"What the water represents can be taken many different ways," concedes Murphy. "Many of the lyrics came to me while trying to be constructive in how I dealt with feeling depressed, rather than just getting wrapped up in my own head."

Although full-throated vocal harmonies are still central to the band's sound, the ten selections that comprise Tidelands embrace a wider range of timbres and dynamics than their 2008 debut, Don't Be A Stranger. Stylistically, this sophomore set is a strong creative leap forward for the young band. There are selections fashioned from little more than hushed acoustic guitar and vocals (the haunting "A Lot of People On My Mind"), and others-like the robust "What Took So Long"-that rise and fall and accumulate momentum, veering towards gospel fervor with impassioned blasts of organ, then reeling back in quiet reflection. Tunes written almost exclusively by Murphy are juxtaposed with those born from long sessions improvising with his band mates: drummer Carl Dahlen, keyboard player Caleb Quick, and bassist Robert Terreberry. There are numbers that were composed at home in Seattle, alongside others created during Murphy's isolation in Alaska ("Empress of the North"). "Lead Me On," featuring violin by Seth Warren of the Maldives, sprang from the union of two different songs by Kevin and Carl. Further enriching the album's sonic palette are pedal steel performances by another member of the Maldives, Chris Zasche.

Recorded in the winter months bridging 2009 and 2010, the record has a more unified feel than its predecessor. "On our first album, we crammed everything on there, because we didn't know if we were ever going to have another opportunity," admits Kevin. "This time I really wanted it to make sense as an album. There was a theme, and I felt that honing in on certain songs and a particular feeling made it a more interesting record, and not just Don't Be A Stranger, Part 2." (Songs deemed worthwhile, but inappropriate for inclusion on Tidelands, found a home on the EP You'll Find No Answers Here, released in June 2010.)

The new album was produced and recorded by the band and Erik Blood (who also oversaw the making of their debut), with additional production input from Seattle stalwarts Phil Ek and Kurt Bloch. The quartet experimented and took risks during this process: multiple reads on the same song were tried, with various vocal and instrumental arrangements taken up and abandoned until the right balance was struck. While "Empress of the North" appears on Tidelands as a hushed acoustic ballad consisting entirely of acoustic guitar and pained, longing vocals, Blood convinced the guys to record an additional, vintage soul-style rendition of the tune. Bloch, meanwhile, recorded the quartet live-in-studio to capture the feel of their spirited live shows.

Though they sprang from Seattle's vibrant roots music scene, the Moondoggies are a band schooled in much more than the common touchstones of the current Americana movement; there are no intentions of treading water stylistically here. It's precisely this creative stretching that has resulted in the bands most artistic step forward to date: Tidelands.