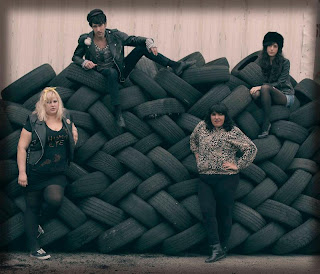 Too Young To Be In Love also marks the first time the group has ever been comprised entirely by "punkettes"-another name for the all girl band that band leader Seth Bogart (aka Hunx) always dreamed of. Shannon Shaw (of Shannon and the Clams) plays bass, and wrote three of the album's songs. Her powerful voice on "Lovers Lane" and "The Curse of Being Young" crackles and breaks with a raw ferocity that perfectly compliments Hunx's swoon-worthy nasal croon. This album also represents a distinct reversal of roles-the all-girl quartet (Shaw, plus guitarist Michelle Santamaria, drummer Erin Emslie, and Amy Blaustein on guitar/organ) bring the fire... while Hunx brings the softness-the sweet, oh so sweet, sugar. All of the ladies sing on this album, and their voices combine to create some modern Wall of Sound magic.

Hunx and His Punx might be the first ever "girl group" fronted by a flamboyant gay male whose dream in life is to sound like a girl. They have created a unique new sound they refer to as "Young Oldies", a mixture of 50s teenage rock n roll, 60s girl groups and bubblegum pop.

Hunx is that boy you just wanna kiss-maybe after sharing a triple-scoop ice cream cone, then roller-skating with the Shangri-Las and Redd Kross rotating on a never-ending loop. He's the boy in that picture from your high-school yearbook-the one you pasted sparkly red heart stickers all over, then taped inside your locker. He's the boy you fantasize about because he always saves you from your broken heart. You've never met him-but you love him... because you know he believes in love.

"I only write songs out of heartbreak" says Hunx of the new record. Older songs focused on trashier homoerotic topics like cruising and boyfriend stealing. But Too Young To Be In Love is all about love and heartbreak. People tend to have scandalous ideas about Seth "Hunx" Bogart. This can happen when you try to French kiss the entire front row at one of your shows, pose for photographs nude or bare everything in the video for "Lust For Life" by the band Girls. But behind all of this is a sweet and somewhat innocent entertainer who knows how to put on a show.

After brief tours with Girls, Harlem, Nobunny and Jay Reatard, the band is set to play this year's SXSW in March, and will embark on a headlining US tour in April 2011.

Hunx and his Punx to release "Too Young To Be In Love" via Hardly Art March 29.