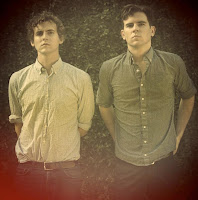 Generationals is the collaboration of Ted Joyner and Grant Widmer. Following the breakup of their previous band the Eames Era, they returned home to New Orleans in 2008 to form Generationals and record their first record, Con Law.

On their second release, Trust EP, (released Nov. 9, 2010), the band is audibly transitioning from a jangling, sun-kissed sound in the vein of Aztec Camera or Felt to pop drones distinctly more hypnotic, textured, and challenging to conjure accurate comparisons for. The shimmering hooks, girl-group choruses, and late-summer breeziness of Con Law remain intact in EP's title track ("Trust"), but are joined by feedback loops, drum-machine beats, and abstractly dubbed-out, wobbling basslines throbbing organically in the fucking mix. Con Law's "When They Fight They Fight" may be Generationals' early-career singsong anthem, but songs like "Say For Certain" and "Victim of Trap" are their lilting, droning annunciations of a burgeoning post-pop sound.

The band has just put the finishing touches on its sophomore full-length, titled Actor-Caster, the album will see the light of day on March 29, 2011 on Park The Van.