Free Music Friday! Lord Huron - 'When Will I See You Again' 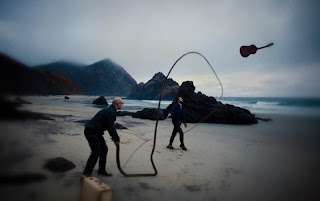 In the spring of 2010 Ben S. traveled easterly from Los Angeles to Northern Michigan. He spent a week at the site of his childhood retreats: the shores of Lake Huron. It was there he set to work developing a batch of songs and a week later, the first Lord Huron EP was complete. He named the recording, Into the Sun.

STREAM: "When Will I See You Again" -
http://soundcloud.com/forcefieldpr/lord-huron-when-will-i-see-you-again

Upon his return to L.A., Ben set to work putting a band together. He called on his percussion-playing childhood friend Mark, who was in Nashville after performing for a time in the Caribbean. Mark swiftly packed up his drums and other gadgets and drove across country to California. The boys then recruited the rest of the Mighty Band, each of whom hails from Michigan.

Lord Huron's music is an auditory travelogue. Evocative of many places, but tied to none in particular. Lush harmonies inspired by Calypso singers, folk traditions and the American frontier fuse with modern experimentation to create the distinctive sound.

The second EP from Lord Huron is called Mighty and it's out now via Bandcamp. Two of the songs from Into the Sun were released on a 7" via Hit City U.S.A. in November of last year.