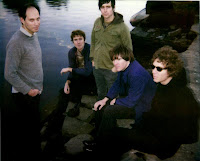 Crystal Stilts' new album In Love with Oblivion will be released in the US on April 12 on Slumberland (and a day earlier in the UK on Fortuna Pop!). This follow-up to their much loved and critically acclaimed debut Alight Of Night continues their foray into spooky 60s psych and 80s dream pop but this time with more flourishes of melody and a bigger, more expansive sound.

Based in Brooklyn (via Florida), Crystal Stilts emerged alongside the very active local post-punk indie scene in 2008 whilst forging their own unique path. They built up a heady following stateside and by the time Alight of Night was released, a flood of accolades followed. In Love With Oblivion sets the bar even higher as they reach dizzying, fuzzy heights as first class purveyors of haunting, atmospheric post-punk pop.

Crystal Stilts street "In Love With Oblivion" through Slumberland April 12.