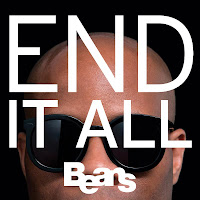 When it came time to craft his fourth album, Brooklyn-based rap rebel Beans needed to get out of his head. His old group, the legendary left-fielders Anti-Pop Consortium, had reunited and he'd been devoting his energy to their long-awaited fifth LP, Flourescent Black. His last solo record, Thorns, was bittersweet-one of his greatest works to date, but an exercise in raw, exhausting emotion. For a minute, he even considered calling it quits.

Thankfully, Beans went a different route. He titled his new record End It All-a make it or break it promise-and looked outside his window for inspiration. What he saw is now the meat of his Anticon Records debut: lush, darkly tinted soundscapes from some of the most inspired names in contemporary production-Four Tet, Clark, TOBACCO, Bumps, Son Lux, Interpol's Sam Fog-united by the inimitable flow and reborn swagger of Beans.

End It All is the first Beans album to feature all guest production, and it finds the emcee pushing his distinct staccato rhyme style to new heights across a varied but fluid buildup of beats. The biggest challenge, and perhaps the best results, comes from "Blue Movie," a Son Lux original that trades in lush orchestral bursts and fuzzy drum pileups. The maximal style is a good look for Beans, who rides the unmistakable wobbly bass and live clatter of Sam Fog's "Electric Bitch" with effortless aplomb.

Lyrically speaking, Beans is at his fiercest, spitting highly stylized braggadocio (see the Nobody-produced "Deathsweater" or Clark's "Hunter") and noirish narratives in turn. A ravenous consumer of mystery novels, his favorite pastime comes to life in the character study found on Four Tet's rapid-fire banger, "Anvil Falling," and in the black imagery that fittingly accompanies TOBACCO's "Glass Coffins." Meanwhile, Beans is at his polyrhythmic best delivering a single track-length verse over "Electric Eliminator," produced by Bumps (Tortoise's drum section).

Aggressive until the end, End It All burns through 13 tracks in 33 minutes, with Beans barely stopping to breathe. There is one exception though, the appropriately titled "Mellow You Out." Here, Beans slows his roll as his own words move in and out of the eerie vocals of TV on the Radio's Tunde Adebimpe. The late-album track is an obvious highlight, but more importantly, proof that Beans is as versatile as he is a true original-making him more dangerous than ever.

Beans will street "End It All" via Anticon Feb. 15.