Free Music Friday! The Babies - 'Run Me Over' 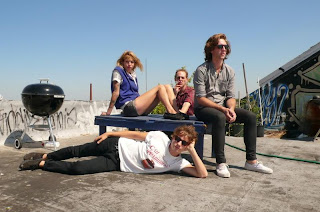 In the winter of early 2008, Kevin Morby moved into Cassie Ramoneʼs small apartment in Clinton Hill, Brooklyn, for a few months. Kevin, who plays bass in Woods, and Cassie, who sings and plays guitar in Vivian Girls, wanted to start a band. They both missed the sweaty loft shows they used to play before their bands moved on to larger venues and longer tours. So they wrote some songs on acoustic guitars and casually talked about playing some house parties.

MP3 - "Run Me Over" -
http://www.forcefieldpr.com/thebabiesrunmeover.mp3

The next winter, when both Woods and Vivian Girls had a longer-than-usual break from touring, they came back to their idea. Justin Sullivan, who had played with Cassie in Bossy, began practicing with them on drums, and the Babies debuted in March 2009 as a three-piece at Dead Herring, their friendsʼ loft in Brooklyn. They played a few times before asking Nathan Stark, formerly of Bent Outta Shape, to join on bass, and the full lineupʼs first shows were that summer.

The Babies recorded and played shows in fits and spurts, whenever they all happened to be in town for a week. They recorded their self-titled debut album with Jarvis Taveniere at Rear House Studios, which doubles as Kevinʼs home; his vocals were done in his own bedroom. (Jarvis, Kevinʼs bandmate in Woods, has also recorded Real Estate, Vivian Girls, and Woods.) The debut album follows 7" singles on Make a Mess Records & Wild World.

The Babies' songs are roughed up jewels that come from the same cloth as Hazlewood/Sinatra, VU/Nico, Pisces/Linda Bruner & other dream marriages. The band will tour the West Coast again in January, where theyʼre temporarily relocating for the winter to write their second record, before going to Europe in the spring of 2011.

The Babies street "The Babies" via Shrimper Feb. 8.