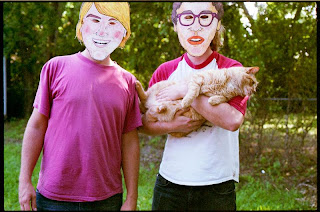 Things that come from Texas are often odd and grand, and this is no exception for Denton's Fergus and Geronimo. Named after the rival child gang leaders from the 1994 movie War Of The Buttons, their music is at times both focused and loose, and comes from a wide range of unexpected influences. At the core of the group is Jason Kelly and Andrew Savage, who met while Kelly was recording and mixing a record for Teenage Cool Kids, a band started by Savage. During that four month process of recording, Kelly and Savage bonded over music, the creative process of recording, and the possibility of having a band that draws from a variety of sources. Black and Chicano doo-wop, the energy and atmosphere of classic soul, the precise control of Frank Zappa, psychedelia, and a thought to nearly everything in between. "Sparks is a pretty big influence - not just musically, but the way that band operates," Savage adds. "It is two guys making weird music with no other agenda than being creative and surprising, and that's what I want this band to be. That band is a great example of a group that makes no compromises for creativity."

VIDEO: "Where the Walls Are Made of Grass" (directed by Alice Cohen) -
http://bit.ly/e0OAt0

Unlearn is the group's first full-length after releasing a handful of singles on various labels over the past two years. Kelly admits to being "very excited and proud" that the record will be released on Hardly Art. Unlearn is an 11-track history lesson on the world of popular music with lush RandB harmonies, authentic rock and roll energy, and a fair share of experimentation. "On this record especially we got into a lot of backmasking and pitch control. But no real rules, it's kind of anything goes," Savage notes. Both members share writing duties and play and sing everything on the record, with the exception of Elyse Schrock's vocals on the title track, and Casey Carpenter and Monet Robbins on flute and sax, respectively. "We went out of our way to treat every song as its own and to give each song different tones and atmosphere," says Kelly. This concept pays off like a jackpot, with each song as a unique piece of a patchwork quilt that fits all of the sounds and styles together like a brilliant puzzle. Unlearn at times sounds old and at times new, but always authentic and informed.

So can you unlearn what you know, as the title track suggests? In a world where information waits in line to enter your brain, how does one decide what path of influence is best to take? "I think that a band like Fergus and Geronimo is more naturally spawned in a place less exposed or less saturated with culture. We got into the music we are into because we somehow wandered into it, and just because we both have a natural inclination for being odd," Savage remarks.

Unlearn is a dynamic of raw passion and indifference that has a really good chance of sulking its way into the mind of the listener. The less you look, the more you find indeed.