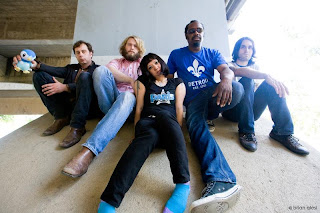 Nearly ten years after their acclaimed Ultraglide in Black helped kick-start a renewed interest in all things Detroit and rock-and-roll, The Dirtbombs are releasing the de facto companion piece, Party Store.

Ultraglide was a covers collection of 60's and 70's soul gems centred on the ideas of African-American identity and politics of the era (see Curtis Mayfield's "Kung Fu" and Stevie Wonder's "Living for the City"). All of the songs made an impression on a young, pre-musical Mick Collins as he listened to them on 45's in the family basement.

Party Store is an assortment of live band interpretations of classic Detroit techno music of the 80's and early 90's. These are songs Collins digested when they were originally released - at a time where he was already making waves with garage-punk legends The Gories. Songs that run the gamut of subject matter from materialistic future-disco braggadocio "Sharevari" (originally by A Number of Names) to cold, post-industrial isolation of "Alleys of Your Mind" originally by Cybotron) through the instrumental optimism of a worldwide house classic, "Strings of Life" (originally by Derrick May)... ALL these themes encapsulate the climate of Detroit both now and at the time of their initial release. Let it be said clearly...this is a record that addresses, at the same time, both the past and the future of Detroit.

With "Good Life" - originally by Kevin Saunderson via his Inner City outfit, Collins recontextualizes the upbeat modern dance élan to echo with post-punk zeal as the zest of doubled harmonies resonates throughout. "Bassbin" (originally by Carl Craig as Innerzone Orchestra) features modular synthesizer programming by Carl Craig himself and is the album's piece de resistance. Clocking in at over 21 minutes, the track's original light jazz underpinnings are diffused into a martial, militaristic backbeat coupled with fire-raining feedback screes from Collins trusty Kent guitar. It is arguably the most intense recording the Dirtbombs have ever produced.

Then end result is nothing short of impressive. The players' recreation of the sequenced, digital rhythms and melodies stems from an Oblique Strategies card pulled during the recordings ("Humanize something that is without error") and they tend to do so with a crisp, krautrock-like precision. For originals that all contained drum machines, sequencers and synthesizers the Dirtbombs takes on these pieces all matter-of-factly and use said tools only to accent what's laid down by the live unit.

The Dirtbombs ability to reinterpret is their trump card and with their work here they will undoubtedly turn a whole new audience of "rock" ears on the techno world they have ignored far too long for no good reason.

The Dirtbombs release "Party Store" on In The Red Feb. 1.